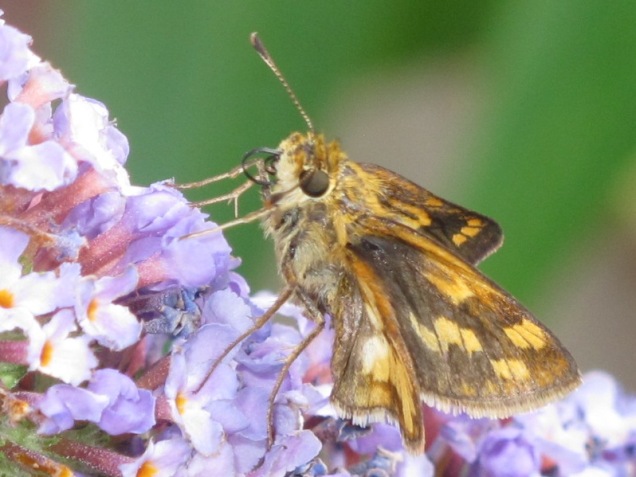 Several years ago we planted a Buddleja/Buddleia in our front garden. It’s commonly known as a butterfly bush. Soon after it was planted I discovered that it’s considered an invasive species in some parts of North America. In the Pacific Northwest, for example, people work to eradicate them.

Give the plant its due, though. It does attract bees and butterflies. Last year at this time I was able to get some beautiful shots of a yellow swallowtail.

The most common visitor is the skipper butterfly. They are so named because they flit or skip rapidly from one blossom to another. They are mostly brown, tan, beige, yellow, or orange in color, and often have markings on their wings such as you see on this specimen. I particularly like that you can see the proboscis coiled at the front of the head. A few seconds before the proboscis seemed to wave in the breeze above a floret.

At the same time as this skipper and a half-dozen or more skippers were visiting the plant a bumblebee and another bee that I can’t identify stopped to feed. I will post photos of them another day.