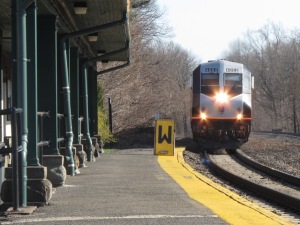 Thursday, 10th April 2014 I walked out of the Pearson Education building in Upper Saddle River for the first time as a former employee. That was probably the most difficult day of the entire transition because it was final and irrevocable. No more enabling a subconscious denial by going into the office just to keep doing the familiar and seeing the faces of the people who have become my friends. I may have not told them all in so many words that I will miss them—I certainly will miss them. I hope that the words that I have written out in longhand, typed, or spoken aloud have served to convey the value that I place on our relationships.

I will miss the physical surroundings in Upper Saddle River. The campus is a pleasant place and our department has the best view of the grounds and distant ridges and hills visible in three directions.

I will also miss taking New Jersey Transit’s Main Line Train, strange as that might seem. For approximately fourteen years it has been my means of choice for commuting to and from the office. For about five of those years we have owned only one car between the two of us, and Jody has used that car to commute to her job. So I have relied on the train almost exclusively for a number of years.

As have tens of thousands of commuters in the New York Metro area, I have experienced my share of delays and cancellations and spent time waiting in the cold. Delays and cancellations seem to cluster in the coldest weather. No matter; I’m still a fan of the train and mass transit in general. I have enjoyed being able to read, write, catch up on email, and snooze while riding on the train. I’ve tried to convert other Pearson people to the use of the train but more often the train riders have converted to the use of private cars or carpooling.

Jody and I often use the train for recreational travel to and from New York, to and from Philadelphia, and even for longer trips. One of my favorite recent vacations was our trip to the Trapp Family Lodge in Stowe, Vermont. It was in late June. We left the house early on Sunday morning, baggage in hand and in tow, and walked to the Passaic train station. We then took the NJ Transit Main Line train to Secaucus, where we transferred to another NJ Transit train bound for Penn Station in New York. There we boarded Amtrak’s Vermonter train for the trip to Montpelier. In Montpelier we were met by a taxi that reminded us of the van that Abuelo drove at ABANSA‘s home in Valencia, Venezuela. The driver looked like he could have been an extra on Duck Dynasty. We could easily have driven from New Jersey to Stowe. It would have taken less time, cost less money, and offered us more flexibility in making stops along the way. Because we took the train, though, the vacation adventure started the minute we left the house and we got to read, write, knit, sleep, and admire the passing scenery in ways that would not have been possible in a car.

If I do take another job that requires commuting, I hope it will be someplace where I can commute by train.